Here’s an update on what’s happening in Annapolis at the end of the eleventh week of the 2022 General Assembly Session.

This week I joined several of my Republican colleagues from both the House of Delegates and the Senate in calling for the majority party, particularly in the House, to join us in fighting against crime in our state.

Unfortunately, the Democratic majority in Annapolis has so far refused to take action on the Violent Firearms Offender Act, which would implement harsher penalties for repeat violent criminals. However, we did get SB 861, which features a number of good anti-crime provisions (including my bill on making handgun theft a felony) through the Senate.

You can watch my remarks from our press conference by clicking here. 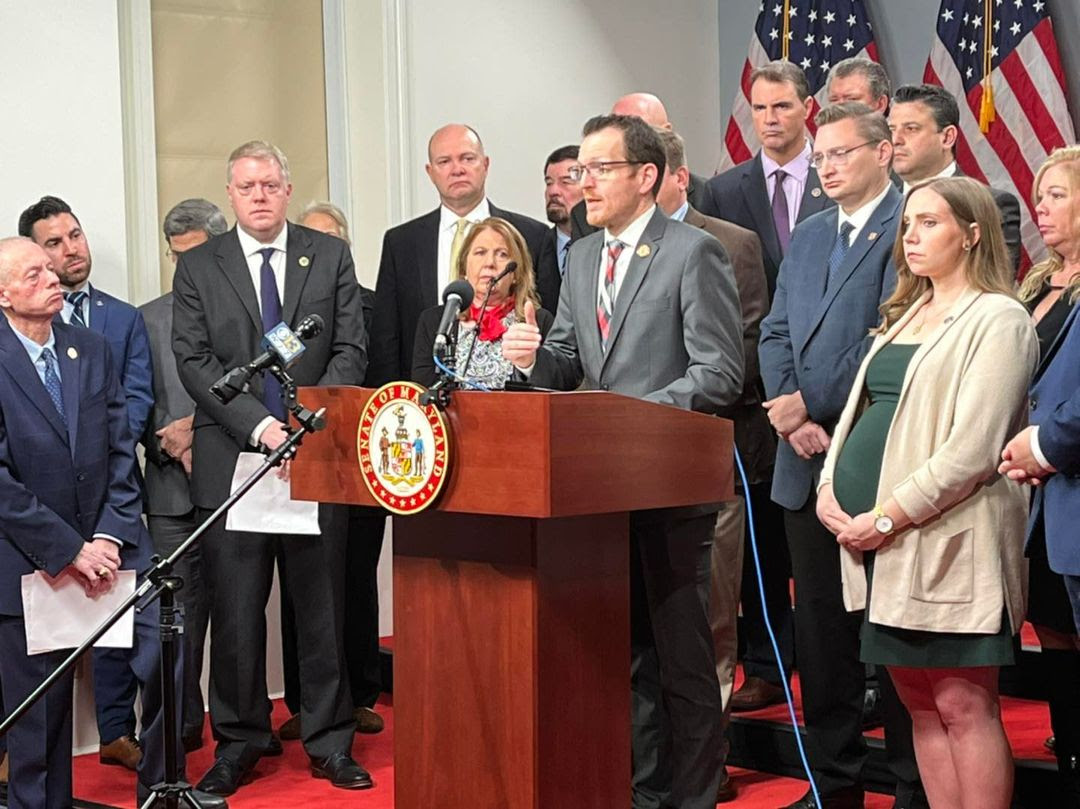 A state court in Maryland has struck down the recently-enacted congressional map, finding that it unfairly favors Democrats and violates the state constitution. According to the court’s order, the General Assembly now has to quickly re-draw the congressional map with stricter guidelines than before. Hopefully, the final version will represent a fair and balanced map that gives more representation to Republicans and doesn’t split up our rural areas.

Most people don’t realize that Maryland already has among the most liberal, permissive laws in the country as it relates to abortion, allowing it all the way through 9 months, for most any reason.

The Senate Finance committee voted to pass SB 890/HB 937, which expands who can perform an abortion in Maryland, and removes the requirement that it must be a licensed physician, instead allowing nurse-practitioners, physician assistants, nurse midwives and midwives to begin performing abortions. This bill also allots $3.5 million per year to an unspecified organization to train non-physicians in abortion procedures. I offered three amendments that were all shut-down in a party line vote. You can watch part of the committee debate on my amendments by clicking here.

Today, we had extensive “2nd Reader” floor debate on SB 890/HB 937 – which is a time to question details about the bill as it’s come out of committee and offer amendments. My colleagues and I offered several proposed amendments, including ones I offered in committee as well as ones to make our parental notification laws stronger, make it clear in law that babies who are born alive are given life-saving treatment in a botched abortion, and to force abortion providers to pay for the training programs the bill mandates rather than taxpayers. All failed on mostly party line votes. You can see the list of amendments and the votes here: https://mgaleg.maryland.gov/mgawebsite/Legislation/Details/SB0890?ys=2022RS

This bill now moves to “3rd Reader” – the final vote, which will take place on Monday night in the Senate.

Criminals are increasing the use of digital techniques such as posing as the Maryland Department of Labor (Department) in fraudulent emails and text messages in the hopes of stealing the identity of honest Marylanders. Because of these evolving schemes, the Department of Labor has been removing links from their emails to claimants and have also told claimants not to click on any links from emails or texts that claim to be from the Department.

Please note:  The Department  WILL NOT ask claimants for personal information or for claimants to verify eligibility for unemployment benefits by email or text message. Claimants should contact a live claims specialist by phone at 667-207-6520 for assistance.

Below is an example of a fraudulent email that was flagged by the Maryland State Police: 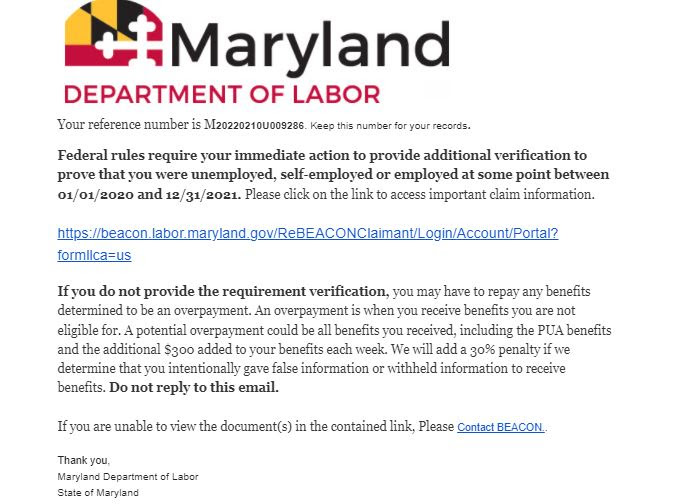