Shootings and violence in Baltimore continue, we have a dire shortage of police officers, but next week Maryland Senate Progressives are putting forth a group of bills that will seek to further restrict law enforcement and their ability to engage in proactive policing under the guise of "reform". Maryland already passed significant police reform in 2016 - done in a bipartisan way with activist groups and law enforcement working together with state's attorneys and other groups for some common sense changes. But today, these progressives claim that Baltimore’s problem is still “systemic injustices in policing.” To publicize this anti-police agenda, the Senate Judicial Proceedings Committee is holding extraordinary, pre-session hearings next week on 14 bills. Only Democrats have bills before us and this is an unprecedented maneuver - actually having "bill hearings" while we are not in session. Below, my colleague on JPR, Senator Bob Cassilly, has posted a quick overview of what some of these bills would do if they became law:

- Create a legal presumption that any police use of physical force is unreasonable.

- Repeal the Law Enforcement Officer’s Bill of Rights. (From Senator Ready: Imagine the Democratic Party going after any other employee union's collective bargaining agreement through legislation! Would never happen.)

- Prohibit courts from allowing police to enter a building without knocking on the door, even when a court finds that doing so jeopardizes the lives of people in the building or the officers.

- Super size a statewide prosecutor to aggressively pursue alleged crimes by police officers while hardened criminals roam the streets of Baltimore with impunity.

- Transfer to a non-police board the power of the Sheriffs and Chiefs to determine administrative sanctions for police misconduct.

These hearings are a major departure from the Senate’s usual practice of dedicating summer hearings to bi-partisan studies and discussion of major issues.  I stand proudly with our police departments. Our Republican JPR members - and entire Republican caucus - are united in supporting our law enforcement. I've worked directly with our local law enforcement officials and all recognize that there are some areas where improvement can be made but it comes with better training - which we are already improving in the state - and with communities working WITH the police, not treating them as adversaries.

I will be sure to keep you posted on this as we move forward.

I wanted to share a letter that the District 5 delegation sent to the Executive Director of Maryland Public Secondary Schools Athletic Association yesterday.  While rec sports have resumed, high schools are still not allowing athletes to play.  Sports are an important part of the high school experience and are especially important to those that hoping for a scholarship to continue their education. Of course I'm also supporting a return to the classroom for students - the Carroll County Board of Education has thankfully set a mid-October date for a potential return, I'm hopeful we can get things back to normal for all our kids. 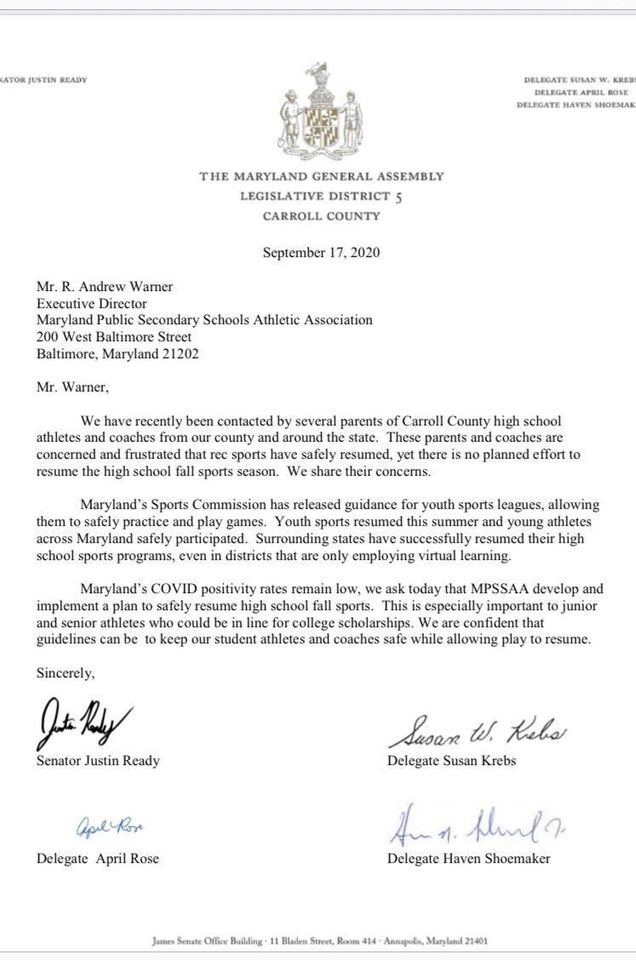 My staff and I can be reached at  [email protected] or by calling 410-841-3683. Both email and voicemail are checked regularly throughout the day. My team and I will do our best to get back to you as quickly as possible.